This documentation has been written to assist everyday users in using the NeuroSchemas App. The NeuroSchemas App is presently owned and maintained by Dev Mindset Community Interest Company for the benefit of those with mental health challenges and autism. Information on the research rational for this app can be found on the Research page where the first whitepaper explains the conception of NeuroSchemas. This App may not be helpful to you and doesn't claim to solve social problems that we can face in life. Though any feedback you have for NeuroSchemas is welcome.

NeuroSchemas can be installed from the Google Play Store on Android, the Apple App Store for IOS and the Apple Mac.

NeuroSchemas main feature is that of a 'Computational Social Schema' which is named as 'Schemas' for short in the App. A Schema in the app is designed to represent a social topic or situation such as a 'Bus Journey'. Each schema has events that can happen. So in the case of a 'Bus Journey' the events could be 'Boarding the Bus' and 'Payment of Fare'.

Each 'Event' can have a list of potential behaviours that are broadly seperated into three groups that a majority would see as 'Expected behaviour', 'Unpopular behaviour' and 'Unlawful behaviour'. So in the case of our 'Bus Journey' example, an expected behaviour for 'boarding the bus' would be 'To form an orderly queue and not push past other passengers'.

Each 'Event' can have 'Challenges' we may face in such a situation. The 'Challenges' are analysed based on the possible conflicts we could have and then methods to resolve it are then analysed.

Each Schema is stored and classified in the NeuroSchemas database. The idea behind using a database is that a Schemas events, behaviours and challenges can be modifed over time to reflect a changing human society. A Schema is unlikely to have every possible social permutation but over time it's possible to cover many a individual is likely to encounter. It's important to note that the behaviours are not there to point out what is right or wrong. Behaviours are simply classified to indicate what is believed acceptable by a majority in a typical social situation.

The Generic Schemas category contains general schemas for common social situations. Inside the Generic Schema category you will find all it's Schemas are grouped into distinct categories such as Travelling and Eating and drinking.

Once a category like Travelling is selected the Schemas are listed such as Bus Journeys and Train Journeys. Each Schema listed has a image and its name. Underneath this on the left are two icons: a microphone with a speech bubble icon and a QR Code icon. The microphone with a speech bubble icon when pressed will read out the name of the Schema (Text to Speech). The QR Code Icon when pressed will show the QR Code of the Schema on screen for others to scan and find. Underneath on the right you will see 6 national flags of the United Kingdom, Australia, New Zealand, Ireland, Canada and the United States of America. If a flag is coloured then this means this Schema was written to apply to this country. If the flag is black and white then this means the Schema wasn't written for this country. However, Schemas designed for the culture of another country may still prove useful to the user. 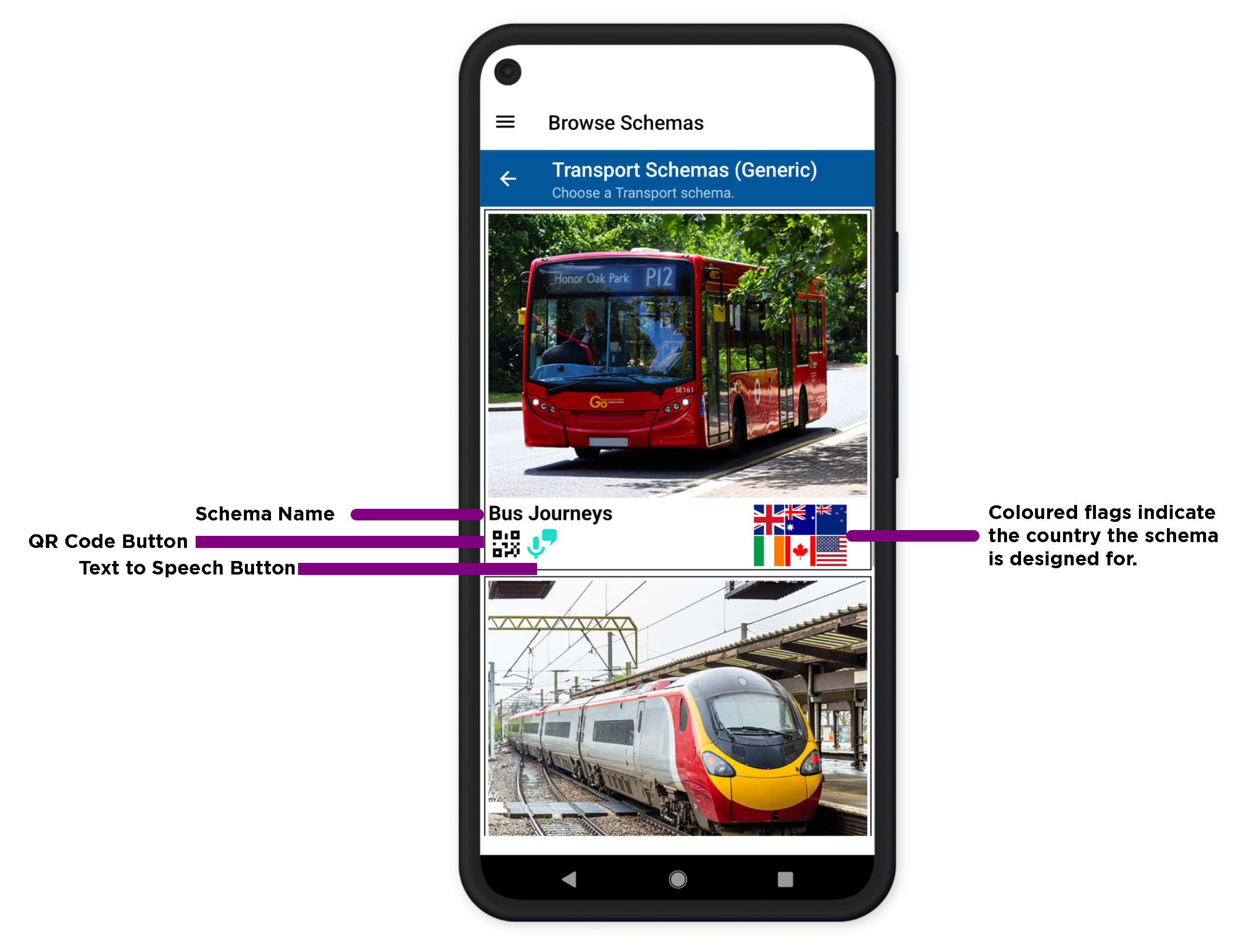 Once a user selects a Schema (typically pressing on its image) the Events for Schemas are listed. Like the screen before an image is shown for each Event. A microphone with a speech bubble icon is displayed next to the event name so it can be read out aloud (Text to Speech). Clicking the Behaviours button will load the behaviours screen and clicking the Challenges button will load the challenges screen. 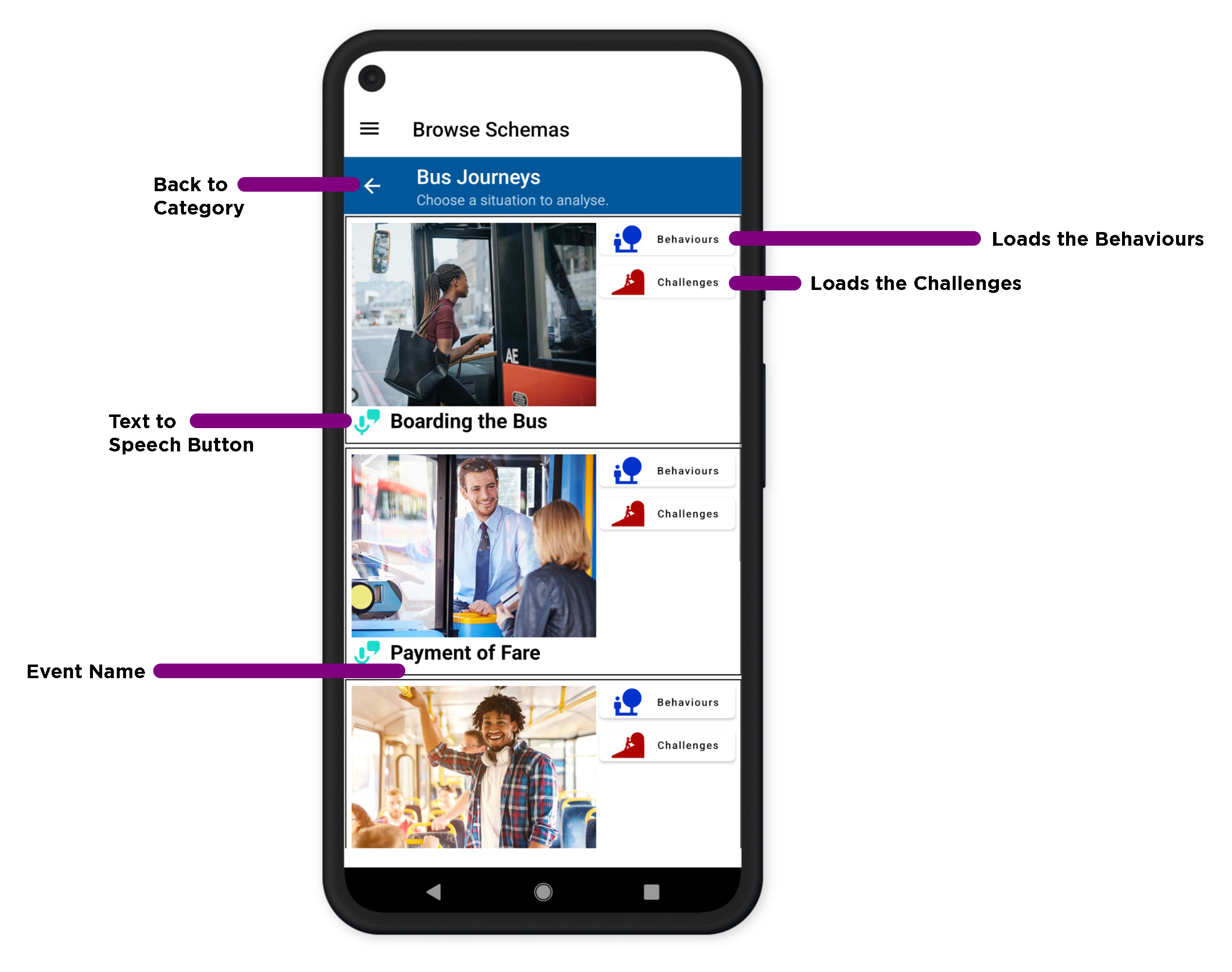 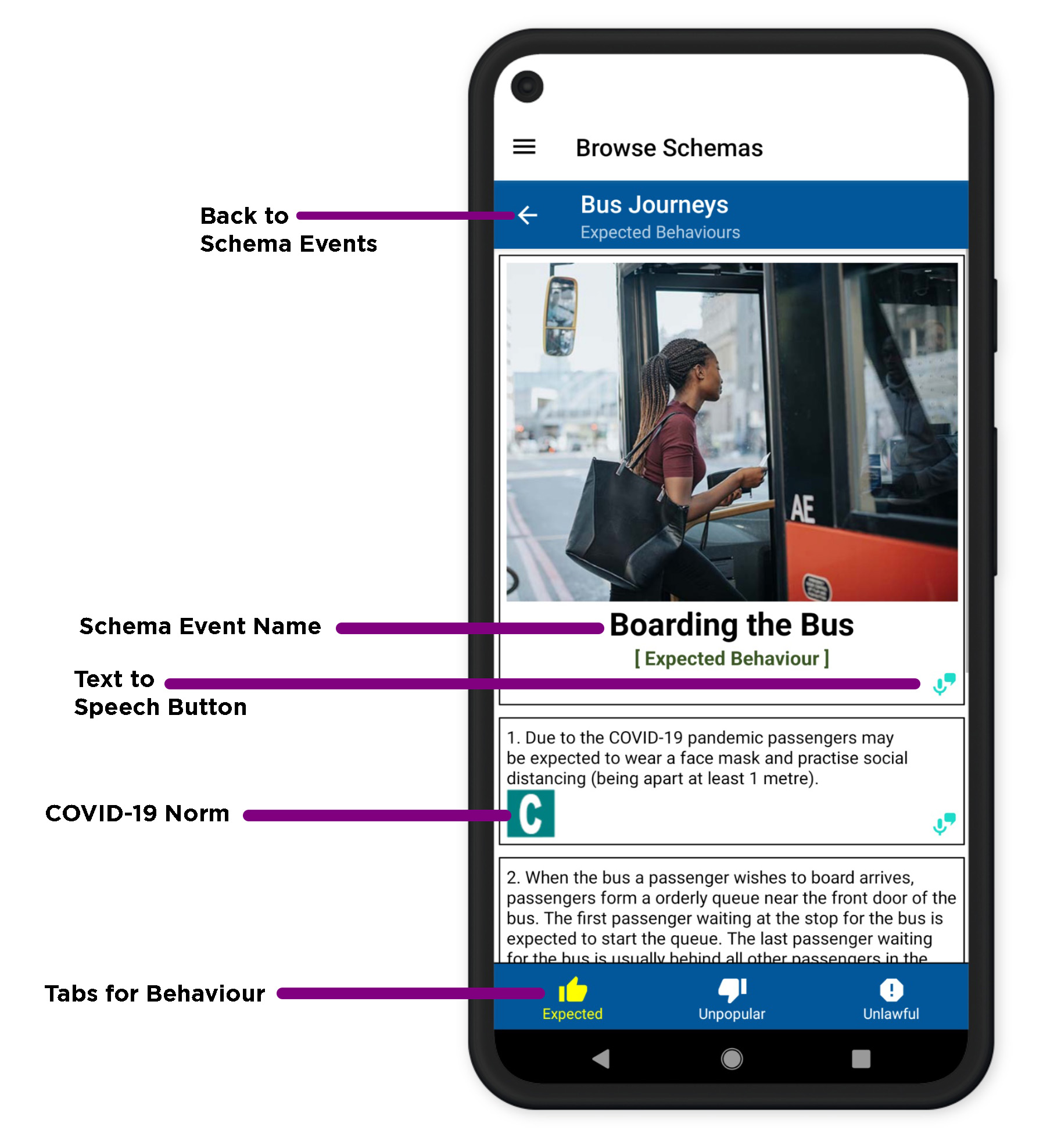 Although the behaviours are divided into three simple groups (tabs) of Expected, Unpopular and Unlawful you may notice there are small icons next to each behaviour that indicate a framework as follows:
Clicking on the behaviour icon will popup an explanation with its meaning. 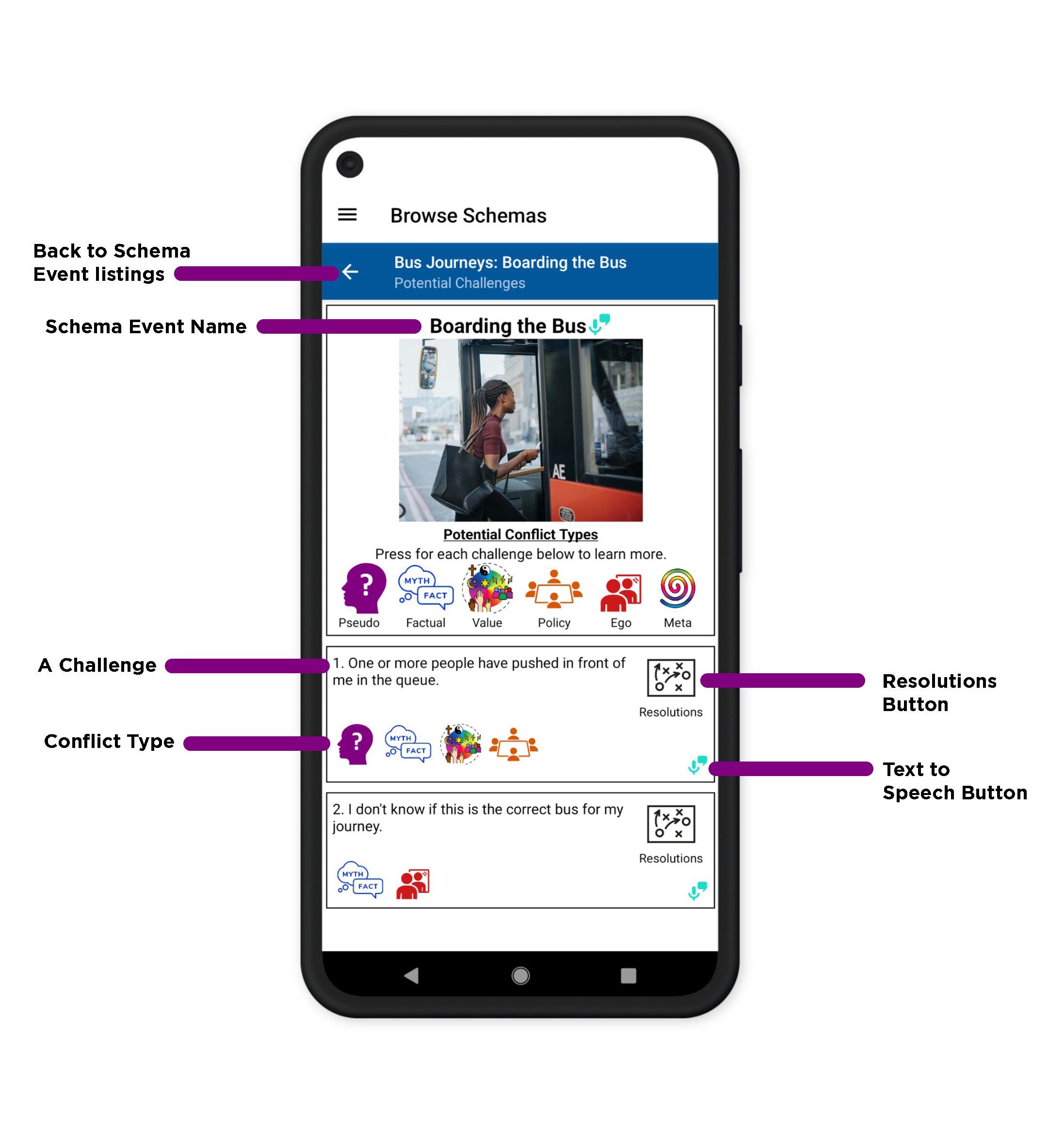 When a user clicks the Resolutions button for a Challenge, tactics are listed and grouped by the tactic types of 'Compete', 'Cooperate', 'Negotiate', 'Withdraw' and 'Reconcile'. Each tactic can have one or more communication styles of 'Aggressive', 'Passive-Aggressive', 'Assertive' and 'Passive'. Clicking a communication style will popup any content describing it. 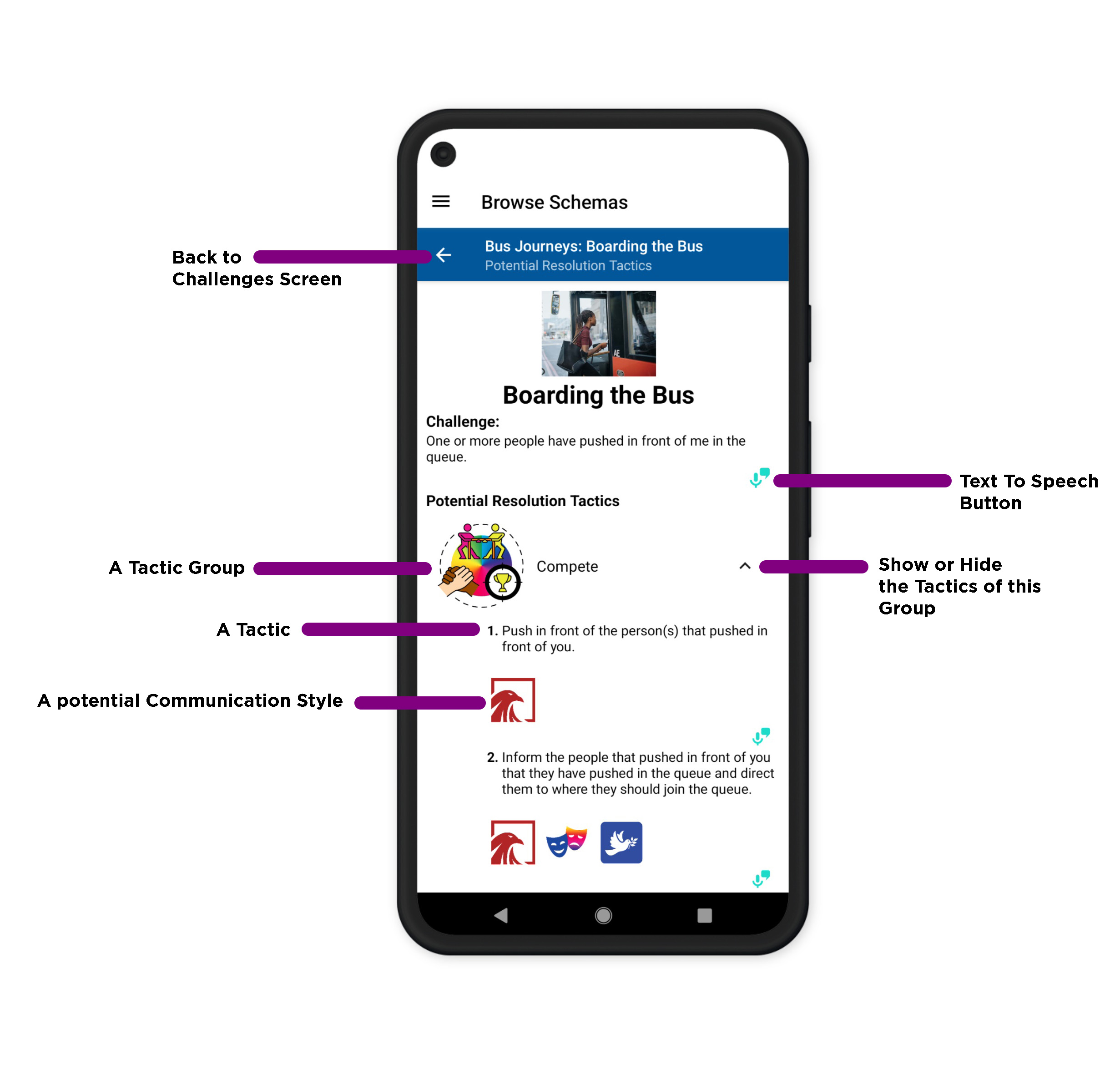 The drawer menu can be accessed by swiping from the far left to right of your screen or clicking on the hamburger menu (three horizonal line icon).

To Scan for QR codes your phone will require a working camera. You can access the QR Code scanner from the Drawer (Menu) by swiping from the left of the screen or pressing on the hamburger icon at the top left. On first loading of the QR Code Scanner you will be asked for permission for the App to use the Camera. Once you have given permission the camera will switch on and you can begin scanning. Once a QR Code is detected in the view of the camera that matches a Schema it will load it. You can find QR codes for Schemas from the Schemas section of our website (under stickers) and for each Schema in the NeuroSchemas App.

The Dictionaries screen can be accessed from the drawer. You can launch a variety of English Dictionaries in your web browser to help you try to understand what is being communicated.

You can activate a Dark Theme from the Drawer (Menu). This will make NeuroSchemas darker.